IX group's club show in Opole was ended great success our ruby bitch - Fela. She was judged by specialist of the breed  Andreas Schemel and became Polish Club Winner and Best of Breed. Later at finals judged by Francesco Cochetti she got III place (BEST IN SHOW III). We are very happy with her success.

Another charlies were shown  at club show very nice  - Arsene got CAC and became Polish Club Winner, Delyth got CAC. Our small charlies (Bursztyn and Brylant Rubinowy Skarb) also became Junior Polish Club Winner. Estimations and excellent descriptions are delighting us more that the judge is the specialist but also the breeder of the breed

Our 11 - monthly Brylant Rubinowy Skarb made debut wonderfully at show in Grudziadz(Poland). At her first show in junior class she received CAC Junior and she became Best of Breed. Brylant showed splendidly oneself also in finals. In elections Best Junior in Show was chosen to the three of the most beautiful juniors of the IX group, in Best of Group IX qualified to final "sixes". We are very proud from her.

At this show our Fela also appeared well. She received CAC and she became best bitch. Unfortunately we caught "rubber" on route for the show  and we weren't in time for the french buldog's estimation. Our Caesar has to wait for his debut for the next show.

Show in Wieselburg(Austria) there was next success our Charlies. Our 11-months Bursztyn got CAC Junior and beating three Interchampions became Best of Breed. We show first time in junior class his sister Bella. Bella were shown very pretty and she got CAC Junior.

Other Charlies also had successes. Fela got CAC and CACIB, Vidor - CAC.

In Erfurt we show also our french buldog Leos. He got excellent opinion, I place and CAC.

Happy Easter to all our Friends around the World and to all true King Charles Spaniels and French Bulldogs Lovers.

We show first time our dogs at show in Luxembourg. Long journey (near 1.600 km in one way) gave us much happiness, both with success of our dogs, and  meeting other lovers King Charles. There were 31 King Charles Spaniels at the show. Breeders arrived among other from France, Netherlands, Germany and Luksembourg. Polish dogs was representing  by our "three": Bursztyn, Bloom and Fela. They appeared excellently and returned with new titles: Bloom Rubinowy Skarb received excellent estimation, I position, remained best young bitch and Junior Champion Luksembourg. Her litter brother Bursztyn Rubinowy Skarb also received excellent estimation, I position, remained best young dog and Junior Champion Luksembourg. Bursztyn and Bloom qualified too on Cruft 2008. It is next success of kids' from our kennel. 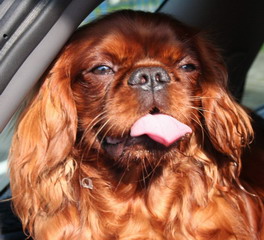 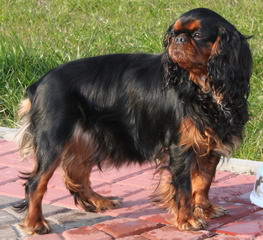 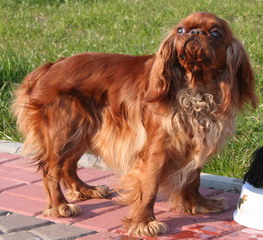 Unfortunately with changing judge's order we were late for estimation with our french buldog Leos. Leos was judged after all frenchies and received excellent estimation. 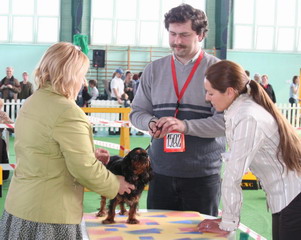 We show also our Leos. He excellent estimation, I position and CAC. 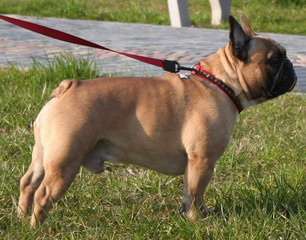 On Sunday we visited solar Slovakia  and we showed our dogs at show in Nitra. Very well were presented our 10-months dogs - Bursztyn Rubinowy Skarb and Bloom Rubinowy Skarb. Bursztyn got CAC Junior, became Junior Slovakia Winner 2007 and Best of Breed. Him sister Bloom also received CAC Junior and became Junior Slovakia Winner 2007. Bloom also appeared splendidly in finals . In elections junior bitches she was qualified for the final eight.

Another Charlies were shown also with success. Fela and Vidor got CAC

Few days ago one of most prestige shows in world - Crufts was ended. There were registered over 140 King Charles Spaniels. CH Cwmhaf Mamma Lucia mother of our Delyth (JCH Cwmhaf Vauderville) became Best Bitch. Rita congratulations for success at this show and regards from her small daughter.

Two Interchampions  are living now with us  - INT CH Vidor de la Bacska and INT CH Felicita z Cerekvicke Strane. Fela and Vidor at shows in Vilnius (Lithuania) received CACIB to obtaining the title International Champion of the Beauty (Interchampion). It is first King Charles Spaniels in history of the breed in Poland with this title. We are very fortunate from their success! Fela and Vidor also became Winners of Lithuania 2007, Vidor with also Best of Breed.

We show with successes their children born in our kennel - Bloom Rubinowy Skarb and Bursztyn Rubinowy Skarb. Bloom in both days received CAC Junior. In less than 10 months our lovely bitch is Junior Lithuania Champion, Junior Winner of Lithuania 2007 and Junior Vilnius Cup Winner 2007. We are keeping our fingers crossed for her next performances in the rings. Her brother Bursztyn was showed also, he  receive Junior CAC and became Junior Vilnius Cup Winner 2007.

In second day we show some another dogs. Also this day Best of Breed received our King Charles - Arsene de la Bacska. He also became Vilnius Cup Winner 2007, he completed Champion of Lithuania. We also showed Elissa, who got CAC.

Our King Charles Spaniel were shown on beautiful things prepared for Cruft 2007. Talented Swedish painter Ewa Wiberg www.ewasfauna.se is the author of these excellent images. We are thanking Ewa, with consent for to put photos of your excellent work on our side.